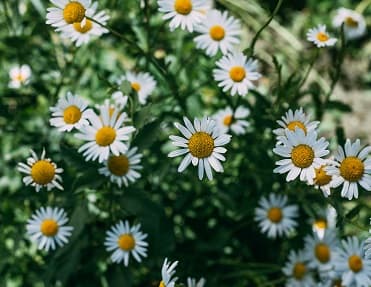 Chamomile is part of a large family of flowers related to daisies. It is one of the most popular herbs in use today. An estimated one million cups of chamomile tea are consumed worldwide, every day! [1] There something about holding a warm cup of chamomile tea that is instantly calming. No wonder that it is such a popular natural sleep aid and calming tea.

Chamomile has a pleasant scent. Its essential oil is used extensively in aromatherapy and in cosmetics.

Historical Use Of Chamomile

Chamomile was an important medicinal herb in ancient Egypt, Greece, and Rome. Traditionally, chamomile tea was, and still is, used to treat insomnia and to induce a calming effect.

Externally, it has been used to treat a variety of skin conditions, such as eczema, burns, canker sores, diaper rash, ear and eye infections, and poison ivy.

Chamomile is one of the nine plants invoked in the 10th century pagan Anglo-Saxon Nine Herbs Charm (sometimes referred to as the Saxon Sacred Herbs).

Medical texts from the 1800s discussed chamomile’s calming effect. More specifically, for "Nervous irritability, with peevishness, fretfulness, discontent, and impatience." [2] So next time you are feeling irritable and peevish, please have a cup of chamomile tea (the language used in old medical texts can be very entertaining!) . This same text also recommended chamomile to treat colic and digestive problems.

Chamomile is widely regarded as a mild tranquillizer and natural sleep aid. Its sedative effects are likely due to the flavonoid apigenin that binds to benzodiazepine receptors in the brain. [3] These are the same receptors that are affected by potent sedatives like valium. Chamomile also contains many terpenoids and flavonoids, which are likely the active ingredients for its medicinal properties.

In a 2007 study, chamomile extracts were shown to damage various types of cancer cells, while causing minimal effects on normal cells. [4]

The US National Institute of Health concludes that chamomile is useful in treating anxiety. [5]