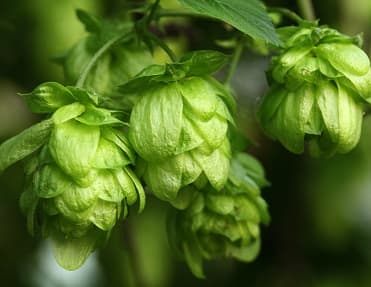 Hops are the flowers of the hop plant Humulus lupulus. They are used as a bittering, flavouring, and stability agent in beer. Hops are also used in brewing for their antibacterial effect and balancing the sweetness of the malt with bitterness. The first documented use of hops in beer is from the 9th century. Documents include mention of a hop garden in the will of Charlemagne's father, in the late 8th century. [1]

Historical Use Of Hops

Hops have long been used as a relaxant. The Algonquins and Mohegan used the blossoms to treat nervousness. The Fox and Cherokee used the plant as a sedative. [2]

In King’s medical text of 1898, he mentions the calming effect of hops.[3]

A pillow stuff with hops was often used to treat insomnia.

In 1922, Felter claimed that hops were good for, uhm, “nervous unrest due to nocturnal seminal emissions”. [4] Let’s move on, shall we?

In 2014, the European Medicines Agency concluded that hops could be used as a natural sleep aid and for relief of mild stress. They also noted that while the acids and essential oils in hops play a role in its sedative effects, one of its flavonoids, xanthohumol, may also have an important role. [5] Separately, xanthohumol is currently under research as an anti-cancer nutrient. Interestingly, a 2016 study showed that high doses of xanthohumol were found to help reduce weight gain, lower cholesterol and reduce high blood sugar. [6]

A 2006 study showed that hops had a sedative effect, that it "reduced the spontaneous locomotor activity", increased sleeping time, and reduced body temperature. [7] Lowering your body temperature makes you drowsy, and is an important part of the body’s sleep process.

In 2017 Breus mentioned that hops enhance the GABA levels in the brain. GABA is an important neurotransmitter that reduces neuronal excitability throughout the nervous system. [8] Again, another indicator of its use as a natural sleep aid.