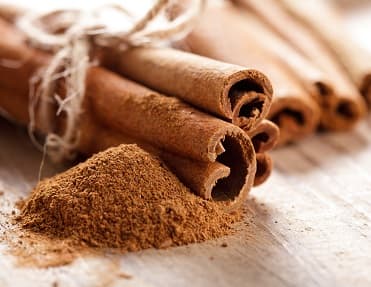 Cinnamon is a spice obtained from the inner bark of several related tree species. The inner bark is peeled off and left to dry for just a few hours, leaving cinnamon strips that curl into rolls. The most common type of cinnamon, the one you normally buy in a grocery store, is cassia or Chinese cinnamon. It has a strong flavor, and it holds its flavor well in baking. However, it is high in coumarin, which was found to be toxic for the liver in high doses. Nothing to worry about if you eat a cinnamon bun or sprinkle some cinnamon in your oatmeal. But if you regularly take cinnamon for therapeutic reasons, you really should switch to Ceylon cinnamon (also called "true cinnamon", or "real cinnamon" - when in fact both are from related plants), which is native to Sri Lanka. It has very low levels of coumarin. However, it tends to lose its flavor in baking. So sprinkle Ceylon cinnamon on your toast and make tea with it, but stick to Chinese cinnamon for your baked goods.

Cinnamon was imported into Egypt around 2000 BC. Cinnamon was so highly prized back then that it was regarded as a gift fit for kings and gods. In Roman times, a pound of cinnamon cost about as much as 4 years of a laborer’s wages. The source of cinnamon was kept mysterious in the western world for centuries by those in the spice trade to protect their monopoly as suppliers. Wild stories which were believed at the time included cinnamon being fished out of the Nile, or giant cinnamon birds that collected cinnamon sticks from an unknown land and used them to build nests. [1]

Cinnamon is a rich source of calcium, iron, and vitamin K, and is a powerful antioxidant.

Historical Use Of Cinnamon

In Ancient Egypt, cinnamon was used to embalm mummies! In medieval times, doctors used cinnamon to treat conditions such as coughing, arthritis, and sore throats. [2] An 1898 medical text first mentions cinnamon as a stimulant, and again in 1922. [3][4] A text in 1919 mentions its role in controlling diabetes. [5] Cinnamon also has a long history of use in traditional medicine as a digestive aide.

Today, cinnamon is recognized as a gentle herbal stimulant, much like other spices such as ginger, cloves, etc.

There are inconsistent results when it comes to claims about cinnamon’s ability to help control glucose levels in people with diabetes. A 2003 study [6] seemed to prove that it did help. But then a 2012 study of the many subsequent clinical trials concluded that there was insufficient proof to make these claims, and that further research was needed. [7] So, for us common people, we can hedge our bets and take Ceylon cinnamon for diabetes, knowing that it may or may not help – but it tastes wonderful!

A 2012 study concluded that cinnamon helped lower total cholesterol and triglycerides. [8] Patients who were not given the placebo also lost more weight and lowered their BMI significantly more than the placebo group. My own take on this is that perhaps because it tastes sweet, it helps satisfy our eternal craving for sugar...