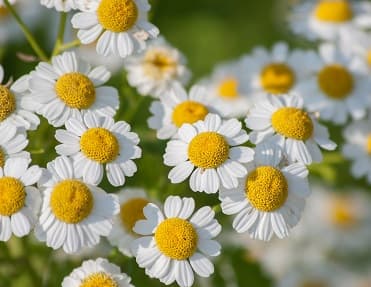 Feverfew is a flowering plant in the daisy family. The perennial grows into a small bush up to 70 cm (28 in) high with strongly-scented leaves. Its flowers are very similar to daisies. Its name comes from the Latin word febrifugia, meaning "fever reducer". [1]

The ancient Greeks called the herb Parthenium, because according to legend it was used medicinally to save the life of someone who had fallen from the Parthenon during its construction in the 5th century BC. Hence its formal name “Tanacetum parthenium”.

Historical Use Of Feverfew

Feverfew also was known as the “aspirin” of the 18th century.

In Central and South America, the plant has been used to treat a variety of disorders, including colic, kidney pain, morning sickness, stomach ache, earaches, as a cardiotonic, and as an enema for worms.

In traditional herbal medicine, feverfew has been used for fever, arthritis, headaches, and digestive problems.

Flowers and leaves and parthenolide showed significant analgesic, anti-inflammatory and antipyretic activities, which confirmed the folk use of feverfew herb for treatment of migraine headache, fever, common cold, and arthritis, and these effects are attributed to leaves and/or flowers mainly due to the presence of sesquiterpene lactones and flavonoids. [2]

The US National Institute of Health, the American Academy of Neurology, and the American Headache Society suggest that a feverfew extract may be effective and should be considered for migraine prevention. [3]