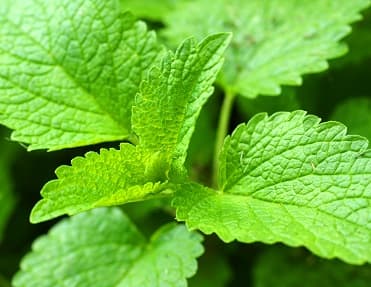 What Is Lemon Balm?

Lemon balm (Melissa officinalis) is a perennial plant in the mint family. It grows up to of 70–150 cm (28–59 in) high. The leaves have a mild lemon scent similar to mint. It is native to south-central Europe and Central Asia, but now well cultivated in North/South America and many other areas. Lemon balm was introduced into Spain in the 7th century, from which its use and clutivation spread throughout Europe.

During summer, small white flowers full of nectar appear, which attract bees. That is why the plant is used to attract honey bees to make honey. In fact the term "Melissa" in its formal name is Greek for "honey bee".[1]

Historical Use Of Lemon Balm

Medicinal use of lemon balm can be traced back to over 2000 years ago by the Greeks and Romans. Lemon Balm is mentioned in Theophrastus’s Historia Plantarum, dated around 300 BC. In the Middle Ages Lemon Balm was referenced by herbalists, writers, philosophers, and scientists, with Swiss physician and alchemist, Paracelsus, calling it the "elixir of life". Lemon balm was introduced to North America by early pioneers, and apparently was one the herbs cultivated in Thomas Jefferson’s garden.

Lemon balm has most commonly been used to help calm stress and anxiety.

A 2018 study looked at the effect of Lemon Balm on patients with cardiovascular problems (specifically, with chronic stable angina). This group was chosen because these patients tend to have high levels of depression, anxiety, stress, and insomnia. The result of the study found that patients:

... had a significant reduction in scores of depression, anxiety, stress, and total sleep disturbance, compared with the placebo group.[2]

In 2014, a study was conducted to measure the anti-stress effects of lemon balm. It concluded that:

lemon balm treatments were generally associated with improvements in mood and/or cognitive performance. [3]