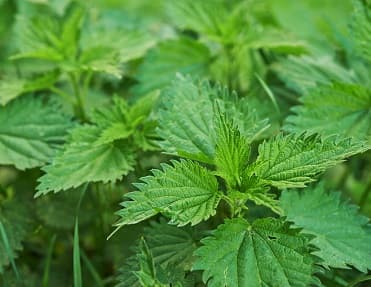 What Is Stinging Nettle?

Stinging Nettle (urtica dioica) is a perennial flowering herb. It grows 1-2 m (3-7 ft) tall and has sharply serrated leaves. Originally native to Europe, Asia and North Africa, it is now found all over the world. The name comes from the fact that they have hollow stinging hairs called trichomes on the leaves and stems, which are like tiny needles, injecting histamine, among other chemicals, that produce a stinging sensation. The English word 'nettled', which means irritated or angry, is derived from the stinging nettle plant. [1]

Nettle is one of the most nutritious herbs. It is rich in vitamins A, C, E, K and most of the B vitamins. It is also packed with minerals: in iron, calcium, potassium, silicon, magnesium, manganese, zinc, and chromium. It also has a very high amount of chlorophyll and is a rich source of antioxidants. This may explain why Stinging Nettle Tea is such a popular drink (maybe also because it tastes good! :) ).

Historical Use Of Stinging Nettle

The plant has a long history of use as a source for both traditional medicine and food in ancient cultures. It was used primarily as a diuretic (to rid the body of excess water) and laxative in ancient Greek times. [2] In medieval Europe, it was used as a diuretic and to treat joint pain. [3] As Old English stiðe, nettle is one of the nine plants invoked in the 10th century pagan Anglo-Saxon Nine Herbs Charm. Traditional Austrian medicine used stinging nettle to treat disorders of the kidneys and urinary tract, influenza, and other ailments. [1] Native Americans were known have used nettle to treat bronchitis and other respiratory problems. [4]

Perhaps due to the fact it is a powerhouse of antioxidants, vitamins and minerals, stinging nettle has many medicinal benefits, including reducing inflammation, fighting infection, and as Gladstar says, it “will strengthen weak kidneys, essential for vitality and energy.” [5]

Its diuretic and hypotensive effect were also highlighted in a 2000 study:

In conclusion, the results demonstrate an acute hypotensive action of U. dioica that indicates a direct effect on the cardiovascular system. Moreover, diuretic and natriuretic effects were also observed, suggesting an action on the renal function. [6]

Surprisingly, nettle has also been found to help with seasonal allergies:

One preliminary human study suggested that nettle capsules helped reduce sneezing and itching in people with hay fever. In another study, 57% of patients rated nettles as effective in relieving allergies, and 48% said that nettles were more effective than allergy medications they had used previously. Researchers think that may be due to nettle's ability to reduce the amount of histamine the body produces in response to an allergen. [3]