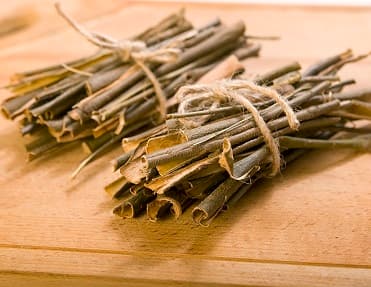 What Is White Willow Bark?

The white willow is one of several species of willow. The name comes from the white tone on the bottom of the leaves. The tree can grow up to 10–30 m (30-100ft) tall, with a trunk up to 1 m (3 ft) diameter. Charcoal made from the wood was important for manufacturing gunpowder. [1]

The active ingredient of white willow bark, salicin, is what lead to the invention of aspirin in the 1800s! Acetylsalicylic acid (aspirin), is a chemical derivative of salicin. It was given a brand name of Aspirin in 1899 by Bayer.

Historical Use Of White Willow Bark

Documented use of willow bark dates to the time of Hippocrates (400 BC), Galen, and Pliny the Elder who recommended chewing on the bark to reduce pain, fever and inflammation. Willow bark has been used for centuries in China and Europe, and by North American healers. It is even mentioned in texts from ancient Egypt.

White willow bark continues to be used today for reducing lower back pain, and pain due to osteoarthiritis. While the salicin is partly responsible for the pain relieving effects, studies show several other components of the bark, such as polyphenols and flavonoids, have antioxidant, fever-reducing, antiseptic, and immune-boosting properties. This is a recurring theme in herbal studies: isolated compounds of a plant are rarely as effective as the whole plant. Some studies show willow is as effective as aspirin for reducing pain and inflammation, and at a much lower dose. [2] This may be due to these other compounds in the herb.

Willow bark can also be used to relieve headaches, with less side effects than ibuprofen.