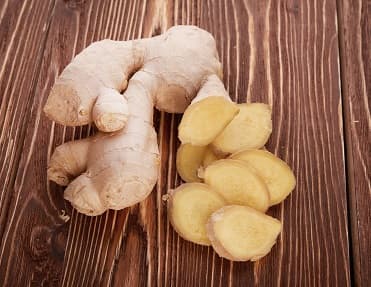 Used in these herbal tea recipe:

Ginger is a flowering plant whose root is widely used as a spice and as medicine. It is a perennial which grows about a meter tall and has narrow leaf blades. Ginger originated from Southeast Asia, and is now an entirely cultivated plant - it does not exist in the wild. Its name derives from the Sanskrit word “srngaveram” which means “horn body”, which describes the shape of its root. [1]

Ginger root was one of the first spices exported from the Orient, and was used by ancient Greeks and Romans.

Historical Use Of Ginger

Ginger root has a very long history of use in Indian Ayurvedic medicine, particularly for digestion, respiration and the joints. In the 1800s western medical texts recognized ginger as both a stimulant and an anti-nausea remedy. [2] [3]

Modern herbal texts still recognize ginger root as a stimulant, much like cinnamon and mustard seed. [4] [5]

To relieve nausea, I have personally used ginger root tea several times and was astonished at its effectiveness. In 2014, the European Medicines Agency released their final assessment on ginger, confirming its well-established use in preventing nausea and vomiting.