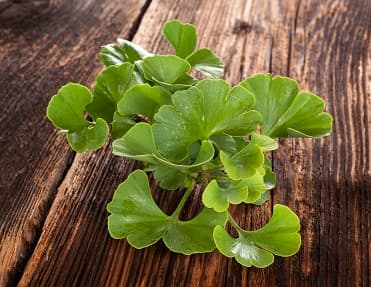 Used in these herbal tea recipes:

What Is Ginkgo Biloba?

The ginkgo biloba tree is native to China. Although native to China, it is widely cultivated in many other areas, including Europe and North America. Ginkgo Biloba is a "living fossil". That is, we can find fossils of Ginkgo Biloba dating back 270 million years. Ginkgo Bilobas are large trees (20–35 m / 66–115 ft) with large, easily recognized leaves ( 5–15 cm / 2-6 in). The trees live a very long time, with some specimens more than 2,500 years old. Ginkgo is used both in traditional medicine and as a source of food.

Ginkgo Biloba is also known as a "maidenhair tree" is because the leaves resemble maidenhair fern. The name Ginkgo is actually part of a spelling error that occurred 300 years ago. Kanji characters typically have multiple pronunciations in Japanese. Engelbert Kaempfer, the first Westerner to investigate the species in 1690, wrote down the pronunciation in the notes that he later used for the Amoenitates Exoticae (1712) with the spelling "ginkgo". This appears to be a simple error of Kaempfer, a more precise translation would have been "ginkio" or "ginkjo". In 1771 Carl Linnaeus added "biloba" to the name, from Latin "bis (two) loba (lobed)", referring to the shape of the leaves.

Ginkgo Biloba is rich in phytochemicals, including phenolic acids, proanthocyanidins, flavonoid glycosides, such as myricetin, kaempferol, isorhamnetin and quercetin, and the terpene trilactones, ginkgolides and bilobalides. The leaves also contain unique ginkgo biflavones, as well as alkylphenols and polyprenols[1]

Historical Use Of Ginkgo Biloba

The first references of Ginkgo as a medicine are from the late 15th century in China. These texts promoted that the leaf could be used to improve brain function. In the west, its first recorded medicinal use was in Germany in 1965.

Laboratory studies have shown that ginkgo is not only a powerful antioxidant, but it actually improves blood circulation by dilating blood vessels and thinning the blood - making it less sticky. [2] For circulatory purposes, this is what is important to us. However, you may have also heard a lot about Ginkgo helping with memory problems. There is a raging debate about Ginkgo in the litereature for this claim. The studies that focus on whether or not Ginkgo is directly able to improve memory and metal faculty are inconclusive. However, it has been shown to improve circulation, and what is good for the heart, is good for the brain, due to its high dependence on blood flow. Increased brain activity has also been measured[3]. As Cichoke puts it:

Ginkgo improves circulation, thereby improving the delivery of necessary nutrients and life-giving oxygen to every cell, including those in the brain. This is why ginkgo is so widely touted as a memory aid and fatigue fighter. [4]

Primarily, Ginkgo improves blood circulation to the brain and periphery and seems to have a normalizing action on the vascular system. Not only does it improve circulation to poorly nourished areas, but also the nature of the blood arriving is improved (less viscous due to decreased platelet aggregation), and utilization of oxygen and glucose are increased. These activities improve memory, mental efficiency, and concentration and make it useful in conditions marred by poor circulation to the brain.
Gingko has been shown to improve nerve cell transmission and enhance brain metabolism.
… this plant has general antioxidant and free radical scavenging effects on the body. Damage by free radicals is looked at as one of the major causes of aging, and the strong free radical-scavenging activity of this plant helps explain why it is so widely used as a tonic for the elderly” [5]

Despite the controversy, in 2015, The EMA (European Medicines Agency, a decentralised agency of the European Union (EU) responsible for the scientific evaluation, supervision and safety monitoring of medicines in the EU) stated:

Important notice: information on this website should not be interpreted as medical advice. Do not take any herbal supplements without consulting your physician, especially if you are taking medication or have an illness. Never take herbal supplements unless advised by a physician if you are, or might be, pregnant, or breastfeeding. Do not give herbal supplements to children under the age of 18.
Specific to Ginkgo Biloba, people with strong allergic reactions to poison ivy, mangoes, cashews and other alkylphenol-producing plants are more likely to experience an allergic reaction Ginkgo Biloba. Additionally, due to its anticoagulant properties, people taking anticoagulants such as aspirin or warfarin must consult with their physician before taking Ginkgo Biloba.