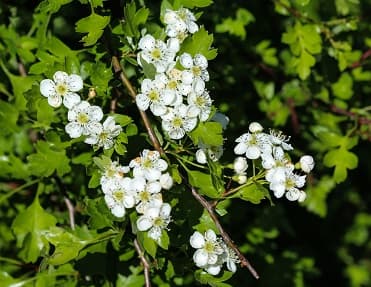 Used in these herbal tea recipes:

The hawthorn plant is really several related fruit-bearing thorny shrubs and small trees. It is native to Europe and Siberia and since being brought to North America it thrives there as well. The name haw is a term for the berries, and comes from the Old English term for hedge. The sharp thorns measure 1–3 cm long [1]. Hawthorn is rich in phytochemicals, including tannins, flavonoids, oligomeric proanthocyanidins, and phenolic acids.

The berries are used to make jam or homemade wine. The leaves are edible, and if picked when young, are tender enough to be used in salads. The young leaves and flower buds are known as "bread and cheese" in rural England. In the southern US, the berries are called mayhaws. The Native American Kutenai in the north west used red and black hawthorn berries for food. On Manitoulin Island in Canada, some species are called hawberries. During the pioneer days, the hawberries were sometimes the only remaining food in winter, and settlers survived on them. People born on the island are now called "haweaters".

Hawthorn is also the state flower of Missouri.

Historical Use Of Hawthorn

Hawthorn was considered an emblem of hope by the ancient Greeks, and its branches were carried in wedding processions. Hawthorn is particularly deadly to vampires according Serbian and Croatian folklore: stakes used for their slaying must be made from the wood of the hawthorn tree. Hopefully none of us ever have to test this use of hawthorn…

A reference to Hawthorn's medicinal uses is first mentioned in Europe in the 1st century by Pedanios Dioscurides, a travelling and military doctor during the time of the Roman emperor Nero. Since then it has been reference in traditional medicine as a cardio tonic. The plant became famously known in the second half of the 19th century because of an Irish doctor named Green. He successfully used hawthorn for treating several heart diseases. Only after his death in 1894 the name of his mysterious drug became known. [2]

In 1938, Dr Jahrbuch Madaus documented that hawthorn was used as medicine since the Middle Ages. At that time the first hint of its effect on the heart originated by Quercetanus (1544- 1609), the personal physician of King Henry IV of France, who produced an “anti-age syrup” from the plant. [3]

Dr. Jennings, of Chicago, in October, 1896, published in the New York Medical Journal a letter containing the following statement:

To this date I have successfully treated with crataegus one hundred and eighteen patients who were suffering with various forms of heart disease, not including fatty degeneration and tachycardia, and of the two latter forms of the disease. From these results my deductions are that Crataegus Oxyacantha is superior to any other of the well known and tried remedies at present in use in the treatment of heart disease, because it seems to cure while the other remedies are only palliative at best [4]

In 2018, the American Journal of Cardiovascular Drugs published a study [5] that stated about hawthorn:

Randomized, controlled trials in patients with heart failure have demonstrated that the herbal medicinal product increases functional capacity, alleviates disabling symptoms, and improves health-related quality of life, all of which have become important targets of heart failure therapy according to current disease management guidelines.

The European Union’s final assessment [2] of Hawthorn in 2016 stated that it has a well-established use in Germany since 2004, for this treatment: Declining cardiac performance corresponding to Functional Capacity Class II as defined by the NYHA. Herbal medicinal product for heart diseases.

Reviews of placebo- controlled trials have reported both subjective and objective improvement in patients with mild forms of heart failure (New York Heart Association classes I through III). Other studies of hawthorn in patients with heart failure have revealed improvement in clinical symptoms, pressure-heart rate product, left ventricular ejection fraction, and patients' subjective sense of well-being.

A 2008 Cochrane Collaboration (a British organization formed to organise medical research findings) analysis of previous studies concluded that evidence exists of "a significant benefit in symptom control and physiologic outcomes" for hawthorn in treating chronic heart failure. A 2010 review stated that "Crataegus [hawthorn] preparations hold significant potential as a useful remedy in the treatment of cardiovascular disease".[1]

The herb thus directly affects the cells of the heart muscle, enhancing both activity and cell nutrition. Any degenerative condition of the cardiovascular system will benefit from its use.

Hawthorn is a particularly useful herb for strengthening the structure of the cardiovascular system (heart and arteries). Hawthorn’s flavonoids have been shown to increase the resilience of the endothelium (cardiovascular lining) to damage that can lead to plaque buildup, stroke, myocardial infarction, and so on.

In 1999, The World Health Organization (WHO) published these results for hawthorn[9]
Uses supported by clinical data: